My friend Julian Knab recently asked me to describe the Legacy constructed format in Magic: The Gathering, as part of his newly-launched Legacy Mediocre League. Here’s my attempt. What do you think? 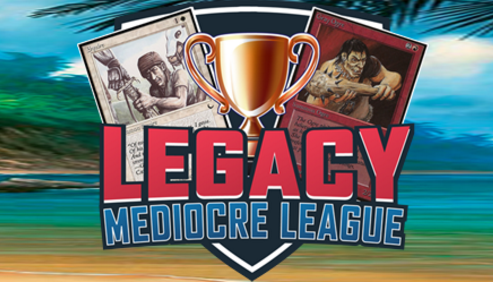 Legacy is one of the most rewarding and skill-intensive constructed formats in Magic: The Gathering. Nearly all of the cards in the game’s existence are legal for deck construction. Whether you played Standard when it was still called Type 2, or missed out on two decades of the game’s greatest hits, Legacy is the place to be. It is steeped in tradition and highly complex in nature.

The Legacy format rewards deep knowledge and familiarity with one’s deck. “Play what you know” is the motto of every seasoned Legacy enthusiast. Whether you are an aggro, combo, or control player, you will find something here that closely aligns with your preferred style of attack.

The great thing about the format is that the metagame is both closed and wide-open. In major tournaments, highly optimized decks rule the top tables and run the most efficient cards in the game’s illustrious history. In practice, however, any given deck can win on any given day. When nearly every card from every set is legal for inclusion in decks, it is impossible to solve the metagame. There are too many angles of attack for one deck to enjoy eternal dominance.

Every tournament contains flashes of possibility – of seeing cards that have been neglected for months, if not years, make triumphant returns. Of seeing older strategies resurrected through the printing of a single card. The most powerful cards in the game’s history will always show up, but there is enough variety in the card pool to keep things fresh.

As the modern game progresses towards a more planeswalker and creature-heavy environment, Legacy has also evolved to match. The best creatures come from recent sets, so the game will not appear completely foreign to new recruits. Attacking remains the surest route to victory.

Make no mistake about it, though. The highlight reels come from deeply complex card interactions. The real battles of Legacy are waged on the stack. This is a format where spells matter. You will be armed with the game’s greatest spells, and be empowered to win at all costs. Games can end on the first turn just as easily as they do on the tenth. Specific pillars of the format, however, ensure that no “turn one” decks dominate. Such is the everlasting power of Legacy.

The intrinsic reward of participation comes from making the right decisions. The Legacy showdown is a battle of inches, complemented by brutal haymakers and unrelenting pace. Every decision, no matter how small, is a matter of life and death. Legacy is easy to learn but difficult to master. Once you get hooked on the Cadillac of Magic, you may never want to play another format again.

Such is the allure of Legacy. Are you ready?